We have a friend who owns a piece of forest here in Istria close to Oprtalj. It is full of wild mushrooms, black truffles and all his life he has found white truffles there too. 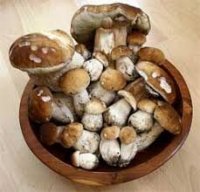 emerged and landed in the Castle kitchen. They were cooked with everything from chunky homemade sausages to pasta dishes.

There were also plentiful supplies of black truffles

and as the white truffle season started those were generously shared too.

Our friend thought that it looked like the season was starting a bit slowly but that the white truffles would continue to come.

Roll forward to December, with only a few weeks left of the season, and there has been a collapse in supply. White truffle hunters from here in Istria to Alba in Italy and the Perigord in France are in despair. The tubers they do find are few and far between and small. They cannot keep up with demand from the chefs and gourmets from the all over the world who expect to buy, whatever the price.

For many people who rely on this harvest the tiny amounts found this season spell financial disaster. In this mountainous region the money families earn from the white truffles, the last harvest of the year, can make all the difference during the long Winter.

The questions have started. Gathering white truffles has been heavily regulated in Istria for a few years now. Unless they grow on your own land you need a licence to go into the forests to look for them. These are expensive and are not particularly easy to obtain.

Before the new rules came in, the start of the season signalled a free-for-all for anyone who knew where to look and locals are wondering if this uncontrolled bonanza damaged the fragile crop. They also speak of a change in the climate which seems to be getting wetter and the truffle grounds not entirely drying out, even during the hot summer months.

Our friend reports finding truffles earlier in the season that were rotten when they came out of the ground. This could be because of a wetter that usual Spring and Autumn in 2017. Nobody seems to know.

Everybody is watching, waiting and continuing to hunt, hoping for an improvement in the last few weeks of the season. Much of what is gathered is sent abroad, but there are producers and chefs here buying white truffles to make oil and various preserves so that what there is will last through till next season and will be available to visitors to Istria in 2018.

And while they still can, every night and dawn when it's not raining, you can be sure the truffle hunters will be out in the forests with their trusty dogs searching for that most-desired hidden treasure.